A few weeks ago I started a new series called 'Volts'.
It started with me going out on a cloudy overcast Saturday and I was looking for something to do. That was when I got a vision.

An image popped into my head. I had to shoot an electricity pole. Square. Black and white.
Euhm, wait a minute, I thought I was a landscape photographer?! Before I knew it I was on my way to do some test shots.

A few minutes from my house there is a – believe it or not – deserted community. Deserted as in: the streets are in and so are all the light poles and a few show homes, and then the developer went out of business. It's a huge eye sore I think but wonderful for this series. I could do some photography in the middle of the street without being on the look out for cars.

These are the images from that session. 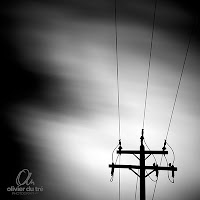 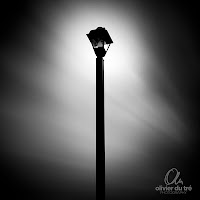 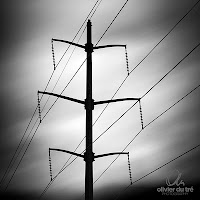 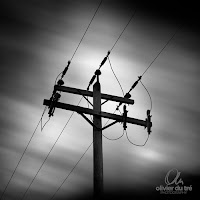 When I drove back into my community, I noticed the light poles. Since I was still 'in the zone', I decided to take a closer look at them too. Turns out they were wonderful subjects. 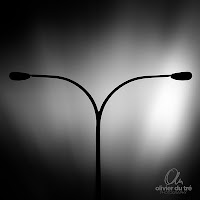 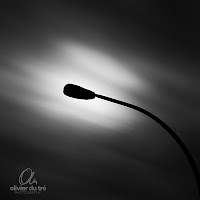 A week went by and last week I had to shoot a building for work. It's a semi modern building that is still in the middle of construction. I parked the car and the first thing I noticed was how simple their light poles were on the parking lot. OK OK I HAD to shoot them! 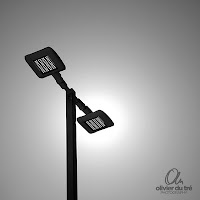 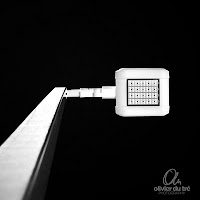 And then I noticed this sad looking light pole. 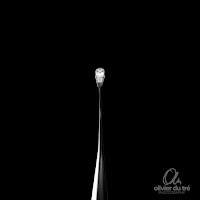 Yesterday I did 2 more. It is a great break from shooting landscapes for me. I am feeding my creative/linear eye right now. I've always loved lines and symmetry. I think this series is a great way to step back a little and step right out of my comfort zone and do some more graphical/art photography. 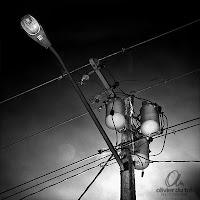 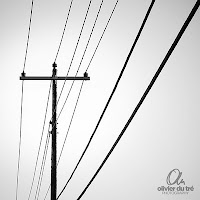 The plan for this series is to make at least 120 of them. And the series would then be called '120 Volts', get it? Or if I find a huge amount of inspiration, I will do 240... For now, it is a great way to fine tune my compositional skills even further. I like simple photography. And when it all comes together, it just gives me a very satisfied feeling. Have you ever had a similar experience? Are you working on something that is completely 'YOU'?

Talk was a succes

I just came home from giving a talk for The Camera Store in Calgary.
According to my pal Jim of The Camera Store, my little seminar at the Digital Expo was sold-out and I was going to speak in front of 100 people. A hundred people?! Holy cow.

I had prepared a handout but – like I said – I did not anticipate the big turnout.
Which meant, I had to disappoint quite a lot of people because of the fact that I ran out of handouts very quickly....

In the end I had a really good time and I hope everybody there took something valuable home.

I'd like to make it up to folks so I uploaded the PDF version of this document to my Google doc account.
The PDF explains some of my photoshop techniques I use to create my black and white photos.
I hope it is insightful and helps you create some stunning work of your own.

Thank you again for all of the support!

Another talk for The Camera Store

At the end of the month (Sunday the 25th of September) I'll be giving another talk for The Camera Store at their anual Digital Photo Expo. I'm up at around noon (11:30am – 12:30pm) and I will be talking about my photography and what makes me tick when I'm doing my work. How you can improve your way at looking at the – for a lot of people – boring Prairies and Foothills. And how you can improve your photography by concentrating on shooting close to where you live.

I'm in the middle of building the keynote presentation and I'm starting to think about what I'm going to say. It's going to be a busy couple of weeks but I think it is all very well worth it. Last time when I did something similar I was very biased in the beginning. Personally I did not like to attend seminars like this. But after doing them, and seeing how rewarding it was, I turned around. It is actually quit fun (once you stop letting your nerves get in the way). Talking about what you love doing shouldn't be too hard.

So as of this morning there are only 6 passes left so hurry to get yours. I would like to meet some of the local people and photographers that are following me on all the different social networks. Let's meet up afterwards for a quick chat.

https://www.thecamerastore.com/events/2011/09/25/hidden-gems-finding-landscapes-close-home
Posted by Olivier at 8:42 AM 4 comments:

Why I hate Instagram/Hipstamatic 'photography'

A few months ago the iPhone became the most used camera on Flickr. And it's not even a CAMERA pur sang! I mean seriously it's a phone people, not a camera!

Some would argue that this is the best thing that ever happened to photography since the invention of film or something. I agree to a certain point with that argument. I agree that it opened up the photo world as a hobby and made it accessible to a lot more people. And let them encounter the joy of photography with their own camera phones.

Camera phones have come a long way. I remember my first 'smartphone' back in 2002. The Nokia 7650 with a 0.3Mp camera. Yes 0.3, you've read that right. With a whooping resolution of 640x480 blurry VGA pixels. Up to today, it was the most expensive phone I've ever owned.

Fast forward 9 years. I now own an iPhone 4 with a 5Mp camera. Still nothing fancy in pure camera terms. Hell, my old Canon Rebel XT has an 8Mp sensor and would still make far better pictures then the iPhone (even if it had 8Mp). And yes before you say anything, I do use my camera on my iPhone. I use it mostly as a resource tool for future shoots. Every time I come across something interesting I take a quick snap. And that's what they are, snapshots that serve me and my 'memory' months later. But that is not the point.

With iPhone users being able to download apps like Instagram and Hipstamatic, the art of taking real 'candid shots' (yes I think it is a real art form) went down the drain rather quickly.
In my opinion it allows every uncreative individual to turn his/hers uncreative and bad framed shots into shots as if made by a 'Creative Genius', at least those people think they are creative by using these apps. Because in the end 'it looks funky right?'.

Of course the real creative person here is the graphic designer/photographer that came up with these filters and effects in these apps. And in essence those 'uncreative people' are copying a processing style or look from those who were creative (and smart, cause they saw the potential and they are cashing in).

I have a big problem with that. As a photographer who finally found his own voice, I am quick to say that I had a hard time figuring out how I wanted to make my photo's look like. After about 12 years or so of photography I think I am really close to what I personally like.

These apps just apply some cliche filters to your shot, make it all look like some sort of 'retro' colour wash fiesta and then, they put the cherry on the pie by adding a 'fancy looking' border to the photo. Tell me, what is so 'artsy' about that? That's not being creative!
I'm sorry to say it but using these apps don't make you a photographer, at all. By the way, most of the photo's I've seen using these apps still look bad, but at least it looks 'retro' and we all know, 'retro' is big business these days.

There is nothing 'retro' about those filters though. Maybe this is a news flash for you but shots from 'back in the day' where not blurry at all (look at this shot for example here made well over a 100 years ago, look at that amount of detail in this, look to the right to that hay stack! That is crazy sharp!). Do you really think Ansel Adams lugged his 8"x10" camera's up mountain slopes to get a blurry shot of a spectacular vista? I don't think so.

Go buy a Lomo or a Holga instead and do some real photography! These things put those blurry effects and borders, light leak streaks and so on, genuinely on there. This is where it all came from. It is a by product from their 'design'. Even better – if you're really interested in this type of photography – try to find a processing style that suits your eye. It will be far more rewarding then using apps like these. Check out this site for some ideas on this type of photography.

O and stop calling yourself 'iPhonographers'. It just tells me you're either too lazy or to creatively challenged to make your own art.

You! Hey you out there! Yes you, you know who you are. Just stop it.

Online critiquing is all a joke

Yesterday was a busy day on Google+. Oh yeah I was able to join Google+ (since it is still on an invitational base only) and I love it.

Somebody in my circles posted a question 'Does owning a camera makes you a photographer and does being a photographer means you need to have the skills and resources to efficiently document others lives?' I had to chime in. Because I do have an opinion about this. SO I reposted the question on my page and we got a decent discussion going.

And then I saw the invite to join Scott Jarvie's and Colby Brown's online real-time critiquing event. So I joined that. Both Scott and Colby are masters in what they do. Both are full-time professional photographers. Scott shoots people (well that's what his Google+ account says) and Colby is a landscape photographer. It was a very interesting event. I could find myself mostly in the well formed arguments when they found something good or bad. But here was the eye opener for me. When they where done critiquing, they invited everyone on the feed to post a link to some of their work and they would randomly pick some and critique those. The guys got bombarded with links (so I guess people really need the criticism). The pictures where far from spectacular. And the critiques where very polite to say the least.

That got me thinking and after some googling I bounced onto this link.

When I read the criticism on this picture it gets me so angry and sad that I just wanna hit something. Like serious people. This is one of the great shots by Henri Cartier-Bresson. One of the great masters ever. If you are starting out in photography. Buy a photo book or two. Learn about the masters. Learn about the history of photography. It will widen you horizon and it will make you respect the hard work by photographers today even more.

When I posted the link on my twitter page, Sarah Fischler – who is a landscape photographer herself and who I am following for quite a while now – posted two more links similar to the previous one. Here they are.

This just makes me even more sad. What are these people thinking? Who do they even think they are?
I'm just glad I did my time at art school. Studying the greats in painting, art, architecture, etc. And then doing it all again in photo school and study all the great masters.
Posted by Olivier at 8:39 AM 21 comments: