Very busy month and a half

A little over a month and a half ago I got an email from The Camera Store asking me if I was interested in showcasing my work in an upcoming group show celebrating The Camera Store's 16th year in business.
Without even blinking, I replied 'Hell Yeah! I would be honored'. That is where my stressful journey to get a high quality print out the door started. This is the story of what happened.

As I said I got an email saying that I could hang 1 or 2 pieces at Resolution Gallery in Kensington in Calgary. Deadline for delivery, August 25th. We were July 27th so I thought, I still have some time. Not a worry in the world. Boy would I be wrong!

It took me about 2 weeks to decide which image to print. I finally landed on this one. 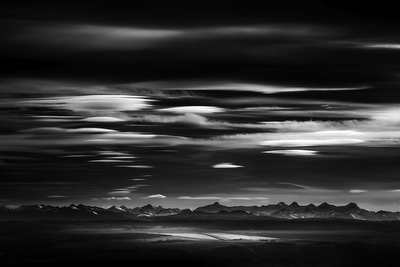 I thought showing the mountains would be a very strong commercial thing to do. Especially around Calgary. People almost go to the mountains on a weekly basis. And having a great emotional picture of them in there living room, would make sense (at least to me).

I've always wanted to show my work large. 20x30" is definitely the smallest I want to go. But for this show I wanted to go even bigger. 40x60" was the size of the print I wanted to do.

Of course this image had to be up-resed. This was a file straight out of the 5DmkII. There was no cropping. So I started with the RAW file and up-resed from there to a 25mpix image. From there I let Perfect Resize 7 do its thing. Then I opened my original file and copied all adjustment layers onto the new file (of course I had to adjust the masks but that's no biggie).
In the end it looked ok-ish. At 100% it didn't look the sharpest. But that was OK (I thought). Since people won't look at a 40x60" print from 2 inches away.

Cool. Done deal. I sent an email to Costas at Resolve Photo here in Calgary. Resolve is in my opinion THE best large format photo printer in Calgary. Especially when it comes to black and white prints. Nobody comes even close here in town.
I asked Costas if he could do me a few test strips before I would give him the go ahead on doing a print this size. A few weeks before I was at an art gallery opening of a photo friend of mine, Jeremy Fokkens, and looking at his work (also printed by Costas) I wanted to try out the same K7 print Jeremy had done. 'No problem' Costas replied. We'll get her done.
A day later I got a call that the test strips were done and ready for me to take a look. I swung by that night (Costas stayed open especially for me) and looked at the test strips. Man, I wasn't happy at all. The K7 sucked the life out of this print (or was it the matte photo rag). But Costas already anticipated this and did the same test strips on the K3 machine with Ilford Smooth Pearl (I love pearl papers). Yes that was the look I was after. But the image sucked on that scale. Looking at a monitor at 100% or looking at a printed photo are 2 different things. What might look good on screen, might suck on paper (and vise versa). I turned to Costas and asked him his professional opinion. Without even thinking he said 'I think you are very ambitious with this image'.

There. That's what I needed to hear. I told him I was so very happy he just told me the truth. He could have just printed this and I would have been unhappy (and lotsa dollars poorer).

The day after we did the dance again. I sent Costas a new photograph (this time I knew it was going to be perfect). This was the photograph and was a stitch of 10 images. In fact the original stitch was larger than 60x40" at 240dpi. 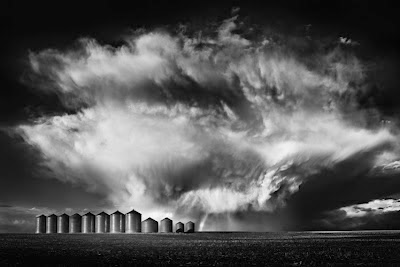 That evening Costas called me that the strip were ready for me to review. I swung by and man o man did they ever look good. So I gave him the go ahead to get this printed and hard mounted. He said "I'll print it tomorrow and I'll mount it on Saturday morning'. Sweet. So I could pick it up in the afternoon and bring it over to the framer.

That Saturday, Costas called me. The mounted print as ready for me to pick up, but he ran into a snag. During the heating cycle of the dry mounting of the photo, some ink came loose. But I had to take a look at it myself. 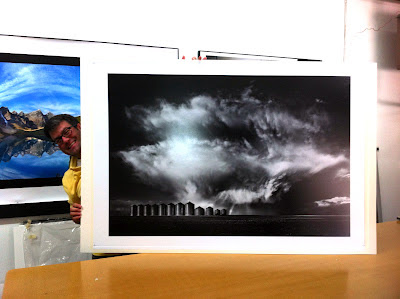 Well ok then. I headed over and at first I was blown away by how MASSIVE this print looked. Like seriously! Was this mine? I asked Costas to hold the print so I could take a quick snap with the iPhone to show the wife.
Back to the issue. There was a 15cm line in the upper left corner (in the blacks) where heating caused the ink to separate a bit. Costas had to point it out cause I didn't see it at first. But once I knew that it was there, it was pretty obvious. Costas immediately said that he would do the print again that Sunday (!!!) but he had to leave for a 3 day hiking trip. So there was no way for me to pick it up earlier than Wednesday the next week. The deadline was coming very close now (1 week to go) and I was really hoping that I would get her done on time. I was wrong.

So I went back to the car, put the rear seats down and I was ready to load this print in the car to get her to the framer so she could get started on it, in advance of receiving the real print the next week.
No luck there. The print wouldn't fit in my car. Sigh. At this point I was ready to just give up on this and call it quits. Everything that could go wrong with it, was going wrong.

Costas immediately said he would print me of a small 11x17" section of the photo so I could at least make arrangements with the frame on what matte and frame to choose, etc. And that I didn't have to worry about moving the mounted print. He was going to drop it off at the framer once it was dry mounted the next week. He gave me the 11x17" print and I rushed over to the framer.

(Are you starting to believe me now when I say Resolve Photo is the best in Calgary? Not only on the technical side of things, but service is amazing AND Costas is there to make his clients happy!).

I met Hannah and Patricia from Framed on Fifth on that same opening weeks prior. The show that Jeremy was putting on was impeccable. Prints were fantastic and the framing was top notch quality too. Jeremy had already told me that everything he does get's framed by Hannah and I thought 'if it is good enough for him, it is certainly good enough for me'. So on Jeremy's opening I chatted with Hannah and 'fist pound'–Patricia (yeah we fist pound, that's how Patricia and I roll) and kinda decided on what combo I was going to go with.
So when I rushed in that Saturday afternoon, the already were up to date with the whole story of where this print was going. We chose the matte colour and everything was ready to go once Costas dropped the print off the next Wednesday.

Thursday came and I got a call from Hannah that the matte was ready for me to sign. I swung by on Saturday the 25th (deadline day. Luckily The Camera Store gave me an extra week to get her done). Cool beans I thought. I will get this done by Wednesday the next week (3 days before the show opens).

I was wrong again...
(You believe me now when I tell you this print is jinx'ed)

I got a call from Hannah that Wednesday (the 29th) saying that the museum glass was in but they noticed that one edge got chipped in transport. I was like 'well that figures, what are my options?'. Hannah told me that it would be almost impossible to get a new piece of museum glass that size in, in time for the opening. BUT we could put in regular glass in for now, and then after the show reframe it with the correct configuration'. Well I was ok with that because I didn't have another choice. There was nothing I could do. At this point we just had to get her done.

I came by the store that night together with my friend Tim (he drives a Hummer and I was sure the print would fit his vehicle) when Hannah told me they special order me a piece of museum glass and that it should come in on Thursday afternoon. Just in time for them to frame it and for me to pick it up and drop it off at the gallery the next day.

That Friday during lunch, Tim was there again to help me move this huge framed print. Until that day, I had not seen the final result. We dropped it off at the gallery and started to unwrap it. 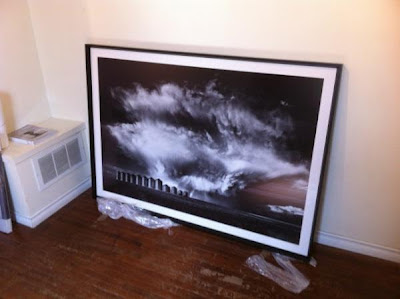 Once all the covers were off, my jaw dropped to the ground. This was absolutely GORGEOUS! Was this piece mine?
That evening I got a few spy pics in my email from Evelyn from The Camera Store. My piece had it's own wall. And was right at the entrance. People would get into the gallery, turn around and WHAMOOOO there she was. My print. 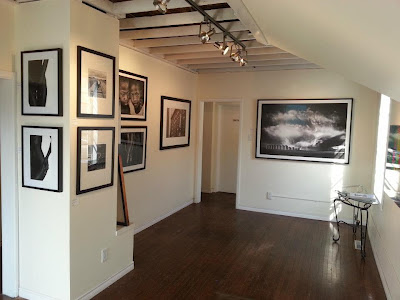 This was a very stressful month for me but in the end, it all worked out. The fact of the matter is that I was lucky enough to deal with 2 small companies in Calgary that were very personal, passionate and knowledgeable about what they do. Hannah handled this piece at it was her own. And Costas has an enormous amount of proud in what he does. That's what I love about small companies. They go out of their way to make the customer happy in the first place. It was refreshing to know that these people still exist. And I would not hesitate to refer anybody to them in the future because I know FIRST HAND how they treated me and my work.

All in all, this piece makes me very proud. And the reactions on the opening reception of this group show were very very positive.

Nothing is more fun to setup shop in the vicinity of your work and hear 'holy f*@$' reactions from the crowd. Those made me smile.