Once in a while I get emails from other photographers with the simple request to share my workflow with them. Usually I just forward them towards a document I've written a few years back (when I was still playing the digital game) that explains everything from capture to output.

Since I believe in the 'sharing is caring' methodology and I don't believe in keeping knowledge (or secrets) to once self, I will share this document with you here too. I've done so in the past but here it is again.

Basically what I do is very simple and very similar to what I once did in a wet darkroom. That is, I dodge and burn, I apply contrast (selectively or not) and I use a technique that is similar to selective bleaching in darkroom terms. That's it. No intricate selections or fancy Photoshop work. I don't have the patience for that I guess.

Now that I've switched to film, nothing has really changed. The capturing of it all now happens on film. And I use Ansel Adams' zone system technique. That means I define the zone where the shadows need to fall on and I measure where the highlights fall on the scale. If they fall lower than desired, I over develop, and vice versa I under develop.

Nothing fancy. See it as the recovery slider in Camera Raw. If my highlights are 'too hot' I can get them back during development. Downside of it is though is you have to really know how high those highlights fall on that scale. So you know how much to over or under develop. Obviously there's no way back. Once the negative is developed you're done.

Well that's partially true. There is still a way of intensifying the highlights in an under developed negative by using a selenium bath. And I've used this technique once with good results.

The key to this all is previsualization. You need to understand and know how you can reach a desired end result on your negative before you start the developing process (or even exposure process all together). And the end goal is to create as much separation between tones as you think is needed. Some scenes require not a lot of separation (think fog images). Too much separation in foggy scenes will render that photograph too contrasty and thus not 'truthful' to the original conditions. I'm not saying photography is truth. My work is often far from the truth.

Lucky for us, but some film these days is very forgiving. The film I am using (Ilford Delta 100) has a very long flat characteristic curve. Which means it will hold highlight information really well without blocking up. 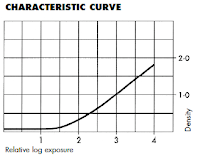 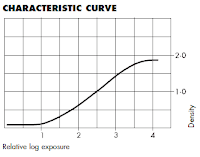 Delta 100 curve vs FP4+ curve. Notice how the FP4+ curve has a real shoulder. Which means if your exposure is not 100% correct, you will end up with blocked up highlights. Notice also how the Delta curve is steeper than the FP4+ curve. This is why Delta 100 is considered a higher contrast film than FP4+. 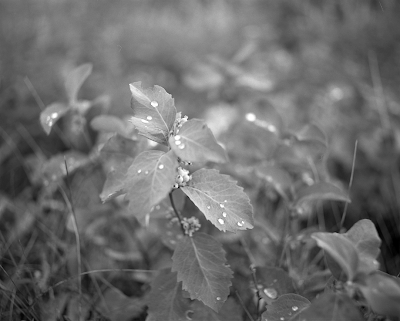 Here's a raw scan of Ilford FP4+ in DD-x. Notice the gorgeous mid tone rendering and very smooth grain structure. This film would work well with portraiture I think.

The difference in film is often described as this. FP4+ is creamier in the mid tones (because of the rounder curve) and Delta is a more contrasty film. Since my work is mostly high contrast anyway, I chose (after testing a lot of film) for Delta. It produces very good results in combination with a developer called Ilfotec DD-x (also by Ilford). It is such an amazing combination in my opinion.
Developers change the look of your negative. Think of your developer as the sharpness slider in Camera Raw. 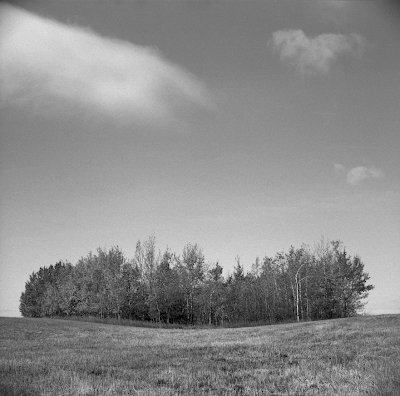 Here's an example of what acutance means. This Delta 100 roll was developed in Rodinal. Grainier than DD-x but slightly higher acutance. 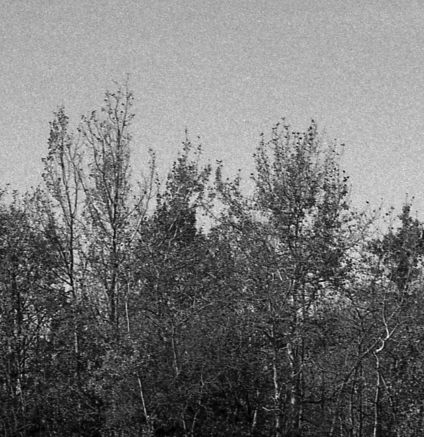 Here's an enlargement from the center section of the photograph above. You could count the leaves and branches if you wanted too. The extraordinary thing about this photograph is that this was made with a 60 year old camera with mediocre optics.

You choose your developer mainly for something they call acutance and grain. Acutance is about the transition between edges. For instance a dark tree in front of a light sky. Acutance describes how sharp that edge is going to be. And how many tones that transition is going to consist of. Think of it as an unsharp mask. Acutance on the other hand has nothing to do with resolution.

Again everything boils down to preference. And grain compared to digital noise is something that is in my opinion beautiful. Grain can really add to the drama in a photograph for instance. Grain also often is accentuated in the darkroom when you start to heavily burn in areas of a photograph.

Here's a good example of what I mean by that. 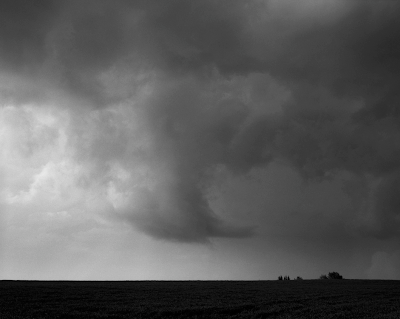 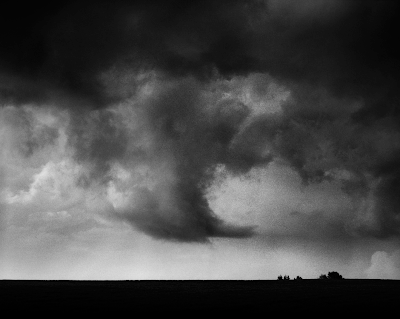 The original scan truthful to the negative (top). You can see I place the foreground on Zone II. Which means deep tonalities and slight detail. In the final photograph (bottom) I added a little bit of contrast on the bottom part of it and a whole lot was added in the sky (together with burning in areas). You can see how that burning in accentuated the grain. I didn't mind that at all in this composition. It complements the drama that this photograph is carrying.

Ok so all of this needs to be decided before I press the shutter. I measure light according to the – non existing – end result in mind. It's an interesting exercise. Because there's no LCD to check exposure on. Everything is done 'in my head' so to speak.

At first that was a challenge. I hardly dared to press the cable release. Was I right about exposure? Was I right about development? Etc etc. It took some time for me to translate my vision to desired negative densities. Now I'm confident enough to make those decisions real quick.

So once everything is developed and hung up and dry, what do I do next?

Usually I have a good idea of what negatives I want to scan in. Yes scan. I will get back to this later in this post. I scan everything on an Epson Perfection V600 Photo. It's a relatively cheap scanner that does the trick for me. Keep in mind my scans are not high resolution. This scanner realistically can't handle anything above 1200dpi. But the scans are fine to produce small 10x13" prints at 240dpi for proofing purposes.

Once I've done all the tweaks to it (like I describe in the pdf at the beginning of this blog) I save the layered tiff to 2 hard drives. I then output a 1000px wide jpeg for posting on Flickr, G+, Twitter and Facebook.

For making the big prints, I'm currently in the process of finding a high resolution scan service in town. I tried out ABL imaging a few months ago and was rather disappointed. A few days ago I contacted a new company and will try these guys out soon.

Printing also happens digitally. I print using simple K3 inks on Ilford Smooth Pearl paper (290gsm) using Epson printers. For all my printing work I use Resolve Photo, who is – by claims of a lot of photographers in Canada – one of the best printers in Canada.

Ultimately. In the next year or so, I want to ditch all digital processes and print in a wet darkroom again.   I am thinking of printing somewhere along the lines of 20x24" or 30x40". In other words. Large.

And I am currently in the market for a 4x5 enlarger. I would love to find a stand alone floor model enlarger like the Durst Laborator or a DeVere 405 or 507.