The story behind the photograph 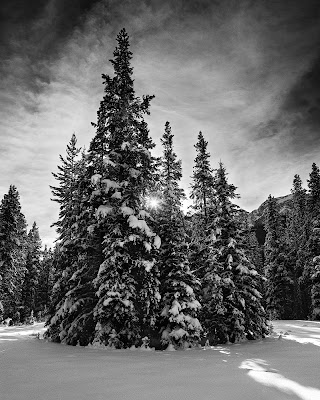 A few weeks back I photographed the Spray Lakes Reservoir area on the edge of Kananaskis in Alberta.

Long story short I had a blast.

But at one point in the afternoon I decided that I had had enough fun and it was time to start make my way back home.

The sun was low – maybe 90 minutes from setting. I was driving on a snow covered highway doing maybe 80–90km/h with tress on either side as far as the eye could see. I wasn't prepared to see anything that was worth photographing when out of the corner of my eye I see something. Something interesting. I checked the rear view. Good, nobody behind me. I slammed on the brakes. I come to a stop in a cloud of snow dust and pull a U-ey making my way back to where I approximately saw ... something. I come to the spot and YES, it's bingo time!

I quickly gather all my gear and make my way through the knee-deep snow of the embankment to this spot. A beautiful circular stand of trees on the edge of the forest.

It was a bit of a tricky exposure. Having a combination of sunlit snow and shadowed snow. Both have pretty solid Zone placements that can't really be misplaced in any other Zone without consequences to the negative. Oh, and I have to somehow combine these deep shadows (the trees) as well.

This was going to be interesting.

I screwed on the red filter to bring out the most contrast I could get in the sky (which had developed gorgeous high altitude ice clouds by now). I measured the light and decided that the shadowed snow should fall in Zone V. The sunlit snow then fell in Zone VII. A little hot but still ok for Delta. The dark trees fell in Zone III with the clouds falling somewhere in the Zone VI area and the blue sky around Zone IV.

Composition was tricky too. I wanted the photograph to be simple. Excluding as many trees sticking in the frame as possible. I changed lenses about 4 times to finally land on the 65mm I believe. Good. That is one of my lenses that has multicoating on the elements. Because I noticed the sun and was photographing straight in it. By stepping about 30 cm to the right from where I initially stood, I could let the sun shine through the trees. The coating would help me keep reflections to a minimum. I choose a small aperture (I believe ƒ16 or ƒ22) to get the smallest sun star possible without affecting the quality of the negative.

A few weeks later, I developed the film. Developing time was normal and I chose 1+1 Perceptol. In the end it's a beautiful negative with great densities throughout and superb detail. I hope it will print pretty easy in the darkroom once I'm set up.

In post I raised the contrast (as usual) and burned in the sky to add even more separation between the tonalities. I also burned in the sunlit snow areas. That gave them a little bit more definition.

It was definitely a scene I had not planned on. But I was very pleased about stopping. In total I shot 3 frames with varying composition. I settled on the last composition.

I sincerely hope you like this photograph and the story behind it.