Drama is my best friend

Photographing in Black and white is one thing I truly love doing. Not only do I like photographing scenes where I already know I want to convert them to black and white. But the conversion itself is so much fun.
Photographers have really forgotten how to dodge and burn in this age of over saturation and instant gratification. And yes, I am guilty on doing that as well in the past. That is why I took a step back a few weeks back, looked at my work and analysed what I really liked doing. And the answer is B&W photography.

Now, often people ask me how I get so much drama in my shots. It's quit easy actually. It is called dodging and burning. A long lost artform from the darkroom ages.
But first let me explain what I do prior to recording a scene.

I've configured 3 presets in my camera. One is for colour landscape photography. The other for aurora shots and the 3rd one is exclusively for black and white photography. In that preset I am actually shooting in black and white mode. So my preview and photos show as black and whites on the back of my camera. Also is my B&W preset configured with a red filter effect with a lot of contrast. But most importantly I am using a custom white balance with a white balance shift where I've pulled the blues all the way to the left. It works pretty well especially with the red filter.

My WB shift point is set to the circled position.

Of course I am working in RAW so all these presets actually ONLY affect the preview and not the actual RAW file. It just allows me to preview my intentions a bit easier.

After I've pulled the file through Photoshops Raw convertor making just a few tiny tweaks I convert the photo to black and white. Usually with the red filter or infrared presets. Then I start to dodge and burn selectively on layers.

Now how do you do that? It is actually quite easy. You make a new layer, and start painting in the area you want to dodge (use white) or burn (use black). Set your layer to Overlay (heavy effect) or Soft light. Done. Be sure to use lots of layers and don't try to do all of your burning, all at once. In the end you'll get something like this.

As an example I'm showing you this image from a few weeks back. 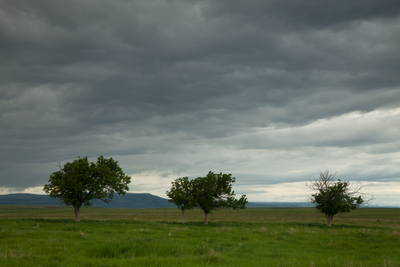 Shot as it came out of the camera. Notice the overcast sky, flat light (my favourite) and overal not really a scene people would see as worth photographing. 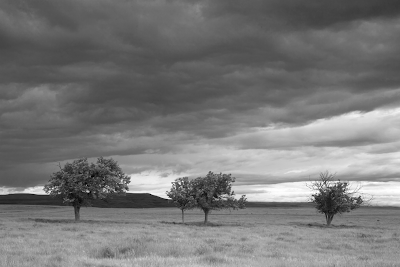 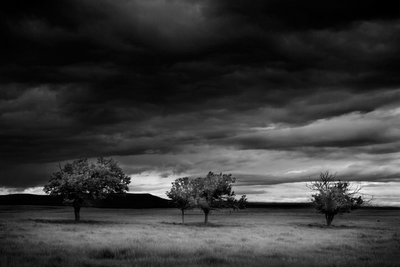 After dodging and burning I got the drama I wanted.

After that I pulled the shot back in Aperture and added sharpening. That was it.
A lot of people think the light actually happened as it was in the shot. Of course it did not! And that is why I love overcast skies.

By the way, people that think their cameras are devices that record reality will never become artists. Once they realize it is a tool that allows them to capture something in the way they saw it in their minds, then and only then we can start talking about photo creativity.

What is your opinion? Did I go too far again?
Posted by Olivier at 11:28 AM