My trip to Belgium (part1)

Yesterday I realized that I've never shared any stories, background info or pictures for a matter of fact of my trip to Belgium. So allow me to make that up to you.

Let me start by saying this. In the weeks before we started our trip I started thinking about the following concept. Would I be able to simplify the landscapes in Belgium so they would 'fit' my current minimalistic vision? Would I be able to eliminate all the power poles, fences, houses I remembered this landscape had.

After a couple of days in Belgium I knew the answer to that question. I would not be able to photograph stuff the way I wanted it. There's just no way. Not around the place I was staying at least.

Then I said to myself, I need to go to the coast and spend a day there. By myself. Just so I can at least photograph something between all the family and friend obligations etc. Yes I was mostly busy doing other stuff than photography.

So one day I went to the North Sea. At first it was an overcast grey day but around noon the sun came to play and by 4 o'clock there wasn't a cloud in the sky anymore. It was like somebody said 'let's give Oli all the conditions (except rain and snow) we have and see what he comes up with'.

I started the day out just over the border in Northern France. The day before I was researching (on Google maps) and noticed some wave breakers just over the border in Malo-les-Bains. It's just a tiny little town with a really nice beach. But the real treat there are these wave breakers. You can really make some interesting horizontal compositions with them. Here's a 9min20sec long exposure of half of one of them. 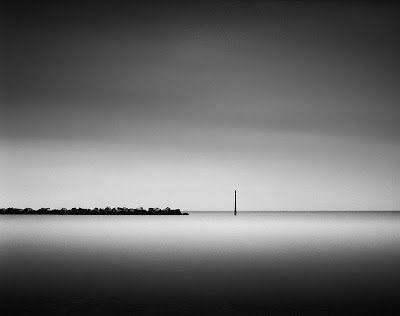 After photographing these breakers for a bit I moved on to Belgium. And then I realized how much I – as a photographer – rely on my smartphone in Canada. I had no 3G, no access to satellite pictures on Google maps, no nothing. I was flying blind. I had no idea where to go.

The plan I devised was simple. Lets stay as close to the coastline as possible. Great plan! So I started following the 'Koninklijke Baan' (Royal Road) which I knew followed the beach. Somewhat.

In Raversijde I saw something I could not pass up on. Somebody placed this beautiful row of white benches on the promenade. But instead of facing towards the beach. The benches faced away from the beach. No idea what the thinking process behind this was but it was perfect for me. Again I slapped on the Lee Big Stopper and made a long exposure. There were a lot of people thinking passing by or driving by on their bikes. Everybody thought I was shooting video so they were all smiling and waving in front of the camera. While I was making the exposure. I knew though the exposure would be very long (I believe this was a 23min exposure) so it really wouldn't matter how many people would pass by. The moment I saw the negative I knew I had succeeded in my vision. I am really happy how this on turned out. Only minor adjustments had to be made. I added a little contrast and burned the edges. Done. 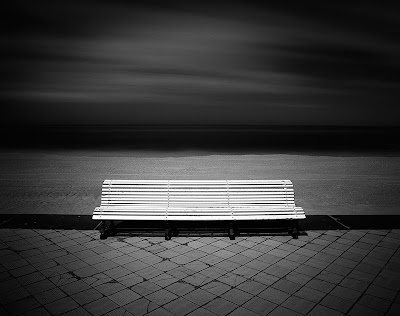 I moved on. Following the same road I was on. I passed by the big port of Ostend and finally in Wenduine saw another scene I HAD to photograph. A really nice stone breakwater going straight in the North Sea. Now this was an interesting experience. When I initially was making my 9min20sec long exposure I had my doubts on how the water would show up.

Here's a little behind the scenes iPhone shot of the conditions that day. 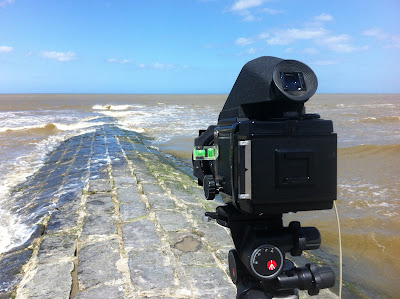 The tide was rolling in. And it wasn't rolling in straight. It was rolling in sideways. Therefor the water level on the left side of the breaker was higher and more turbulent then the left side. Big was my surprise when I saw the negative. The foam on the waves had formed this misty white L shape. I like L shapes. I don't know why. But they 'hook' your eye and throw it in a complete different direction. It's different then an S-curve for example. The L-hook is more violent or dynamic I think. Anyway. Here's that photograph. Again, minor tweaks. Contrast and a bit of dodging and burning. 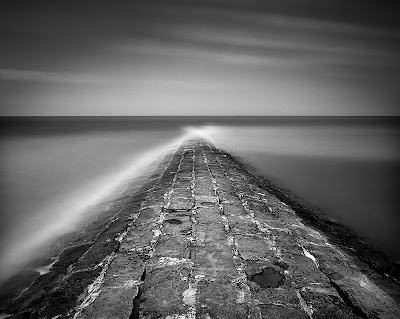