So what happened on Day 2 of the workshop I hear you asking yourself. Here goes...

We met on Sunday morning at 7.30am in the hotel lobby (after a short night, we picked that one weekend out of the year where overnight our clocks jumped forward an hour). I arrived at 7.10am and was surprised that one of our students was already present in the lobby. That meant a lot to me personally. It would have sucked if everybody showed up late. But nope, everybody showed up on time (that must have been some sort of record no?).

We left for our first stop of the day right on time and arrived just minutes after sunrise, just like the plan +Marc Koegel and I had in mind. We had hoped for some colour in the sky but that was far from happening. Oh well. No colour, but a good sky for us minimalists. First we stopped at a location where I photographed one of my favourite winter photos as of yet (above). A beautiful line of gnarly looking trees. We had a lot of fun with these trees and a lot of good came out of this subject.

People started to experiment all over the place. Some where photographing a hay bale scene a little further down the road or just taking off on their own exploring the tree line. Which was great!

We had the range road for ourselves all morning long. After about an hour and a half we moved on to a second subject just down the range road.


The day before I had shown some work by other photographers, and I knew that this bleak looking Quonset would be just the subject where we could try our hand at some of that, bleak looking, minimal colour work that is so trendy these days. I knew there was a photo there but not a lot of students saw it like that. I had to do some convincing.
Above is a photo I took from the car on a different day and below is a photograph made on the day of the workshop. You see that conditions play a big role in minimalizing and rendering this particular subject. A great challenge for our students and some came away with a killer photograph. 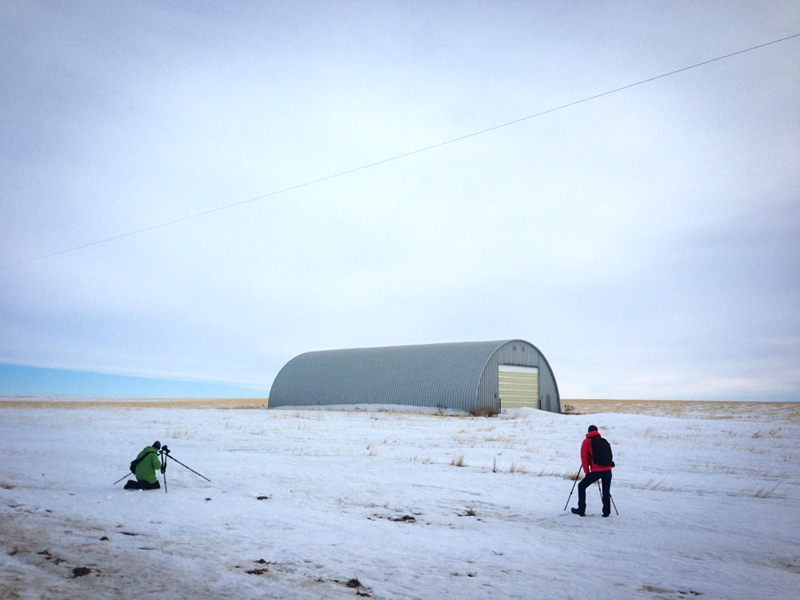 After playing around with this subject the sky gradually cleared from the north and we moved on to the third subject. A nice little abandoned shack with a nice tree next to it. Again I have very little photographs to show form the day itself. But take my word for it, it's a nice little scene.

Students were now awake and were photographing on both sides of the rangeroad. Pretty cool to see that after just a few hours people started to see and think in a more minimalistic way already.

After all of this we gathered the troops and returned to the hotel. It was 12.30 when we arrived back at the Acclaim. The Italian place next to the hotel was again our venue of choice for a quick bite.

The afternoon consisted of +Marc Koegel and I reviewing and commenting/discussing our students' work from the day before. At some points we were absolutely blown away by what people had produced. Some photographs needed a little bit of fine tuning. But in the end we had a great 2.5h critiquing session, which I think was very helpful for all our students. We demonstrated what was good in good photographs and why it was good. And corrected the photographs that needed a bit of help and again explaining why we saw it that way.

In the end everybody went home with hopefully some new knowledge that will help them for years of photography.

In the next few posts I will also share some of our students' work from the workshop.