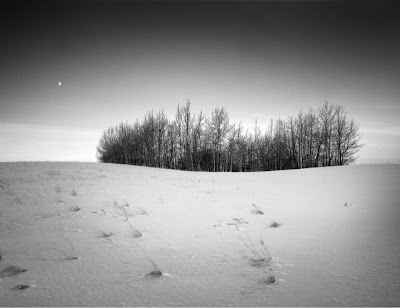 When I started out in photography some 14 years or so ago, none of my instructors prepared me for the fact that photography would be such a tough mental game to play.

When I moved to Canada years later I thought that I would now finally live in a place where I could have time to work on those pretty pictures. After all, with the Rocky Mountains so nearby, I would be able to tap into an infinite source of majestic scenes. Succes was guaranteed! Or so I thought.

Now I know photography runs much deeper than that. As I matured as an artist I became aware of the fact that I was becoming more and more unsatisfied with what I was doing. Not because I couldn't identify pretty scenes or take photos of those pretty scenes. But because I had seen it done, all before. And everything I was seeing, was getting boring.

I didn't really understand what was going on with me back then, and why I was feeling what I was feeling, but looking back I now know I went through an important artistic change.

When I give talks about photography I often talk about my personal journey. Not because it is a unique story (who are we kidding?) but because I believe it may help people to better understand their own path.

I often talk about 'the plateau of mediocrity' in those talks. Because, for the longest time, that's where I was stuck on. I kept making the same pretty picture over and over again, but I never really moved on.

A lot of photographers are stuck on that plateau and they don't even know it exists. Look around you, landscape photography magazines are full of these pretty pictures of scenes we've seen a million times before. Do we really need to see any more photos of the slot canyons in Utah or maybe a little more local for me, Vermillion Lakes and Mount Rundle?! It is all the same pre-chewed material photographed with a different camera and not a different vision.

For most photographers, that plateau is where they will happily spend their entire careers on. It is a safe haven. 'Safe' being the keyword here. But for a few of us, that plateau feels wrong. It feels 'flat'. It feels like a place where no progress can and will be made. EVER!

The more I matured, the less that plateau felt like a place I wanted to be spending my career on. And over time the work I produced on that plateau did not internally satisfy me anymore. As a result I wanted to throw all of my work away and start all over. And more often than none the 'why the heck am I doing this for?'-question popped in my mind.

If this sounds familiar, do read on.

That's when I realized that I was artistically growing. So what the heck was going on?!

Bingo! That was exactly the core of what I was dealing with.

Back then, I did start all over. I stopped photographing in colour and went back to my b&w roots. But a year later that came to a grinding halt as well. Digital b&w photography for me was not the answer. For 4 months I didn't take a single photo. I was trying to figure this out. I was so sure about the b&w part that I couldn't figure out why I was still dissatisfied with my work.

That's when it hit me. The solution to continue the long and steep climb of progress for me was to return full time to film.

You're done digital! Over and out.

As by magic I was inspired and motivated again. I just realized the date was June 2012. Since then I stepped up my game and went from medium to large format photography but that didn't change a thing about my work and more importantly why I do what I do.

So if you feel like you're stuck or not satisfied anymore by your work. Just know, feeling that, is an important step to become a better artist. Embrace it! Use those feelings and try to translate that in meaningful, thoughtful and intelligent photographs.
Posted by Olivier at 10:06 AM