Composition – for me – is an intricate part of my 'seeing' process. I go to great lengths to look at scenes from different angles whilst thinking of different focal length lenses and how that changes the relationship between subjects in a photo.
What do you do for example when you can't use the rule of thirds (or is that turds), leading lines and frame in frame? Do you just wing it? Use your gut feeling? Or do you spray and pray and hope you have one photo where you can crop something out from?
What if I told you there's a whole other way of framing your compositions out there. It's not new. But it's a more classical, dare I say a more refined way of composing. And it dates back as early as the Greek Temples like the Parthenon.

Let's start our discussion with this seemingly simple looking photograph. It's a photograph I made a few months ago in Banff. I took just one photo (I exposed 2 sheets) on this location. Once I saw the composition I wanted in my head (after about 30-45 min of walking, pondering and thinking), it was just a matter of setting up the camera and expose those 2 sheets.

So what's so special about this you'd ask? Let me explain. 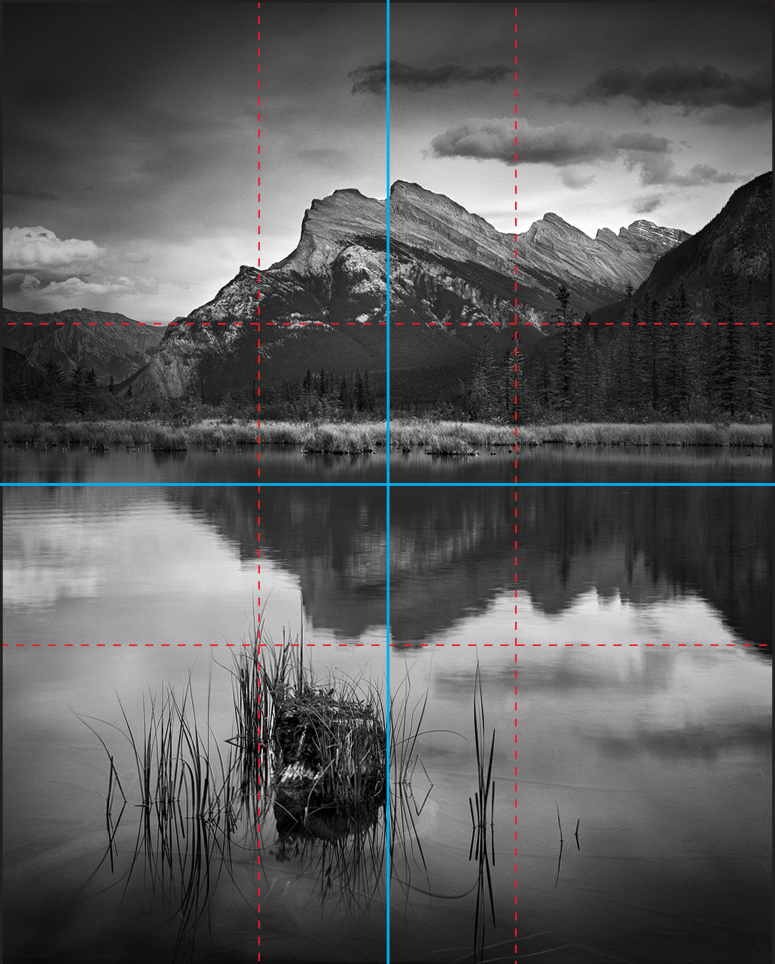 If I would have used the rule of thirds I would have had to use a shorter lens, the stump in the foreground would have covered up the reflection. And personally I don't like overlaps. But to each his/her own of course. And the composition would have too much breathing room around it. I like things tight and I only like to include the most essential elements to tell my story.

Let me explain how I DID compose this photo.

First I looked at the bulk of the photograph. The mountain, the shore line, the reflection and the water.  Maybe you noticed already but all that stuff makes a perfect square (red) starting from the bottom edge. The top of Mount Rundle would be the top part of the square. I then 'guessed' where the shoreline in the distance had to be. A technique I love to use in a composition is to use a line starting from a point where an imaginary circle (centred around the bottom left corner) crosses the baroque diagonal (blue line) for that square. That's where – in this photo – I placed the horizon line (green dotted line). This line actually makes what we call a √2 rectangle. A rectangle where the short side is 1 and the long side is √2 (more on that later). This whole exercise will tell you how high your tripod needs to basically be and what focal length lens you need to use. Sounds more complicated than it is. Here's that all explained visually. Also note the repeating diagonal of Rundle's edge (solid green line). 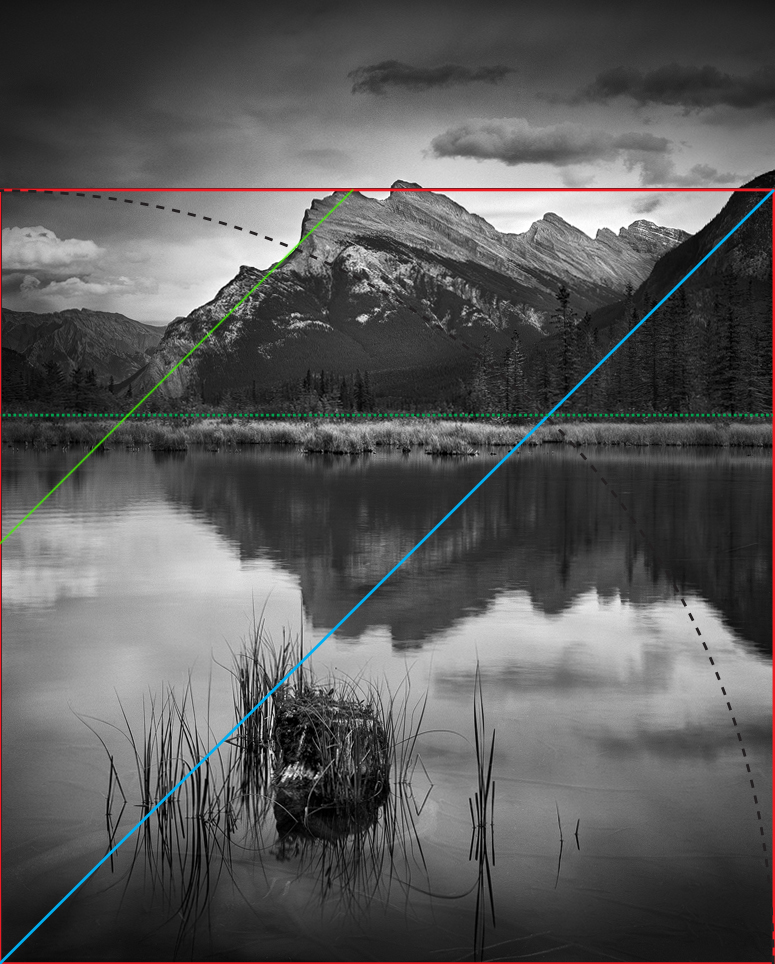 Let's move on and let's place that stump in a spot that is visually appealing. What I did for this was very similar. I kept the square on the bottom but I flipped it all around. I again used the baroque diagonal but this time I drew a circle, centred around the top right corner of that square. And applied the same technique as previously discussed. Here's the two overlaid. 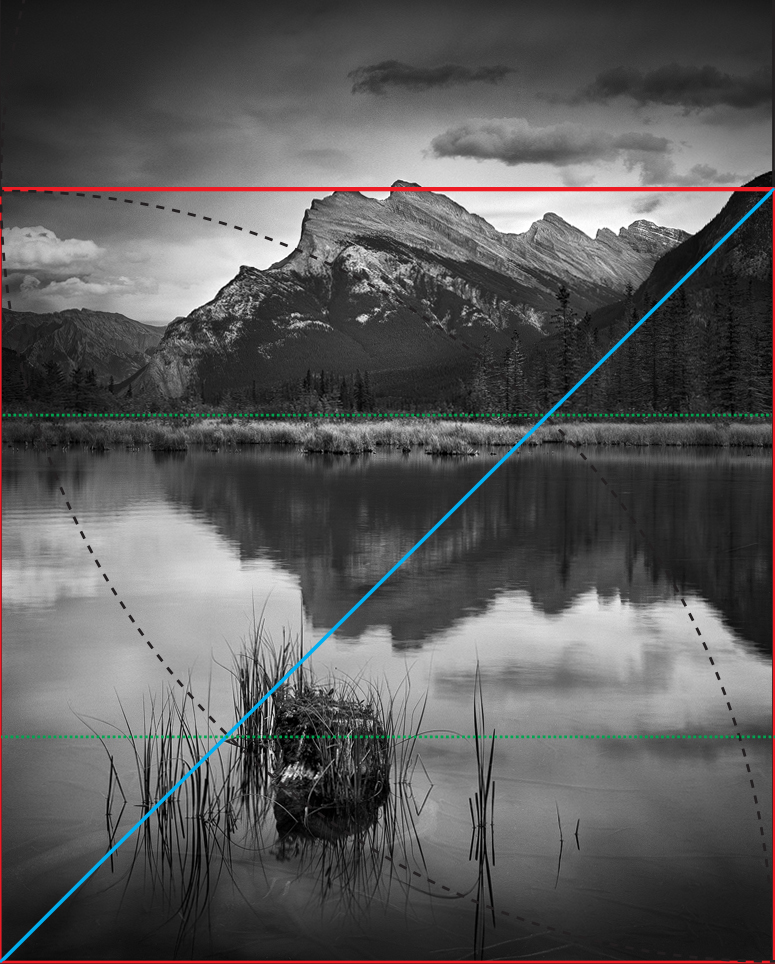 There, now I knew I wanted to place that stump on that horizontal line. But where vertically? I decided to use another technique for that. But now based on the diagonal of the whole frame instead of just the bottom square. I used the same baroque diagonal (bottom left to top right, red) and lowered the reciprocals (blue). 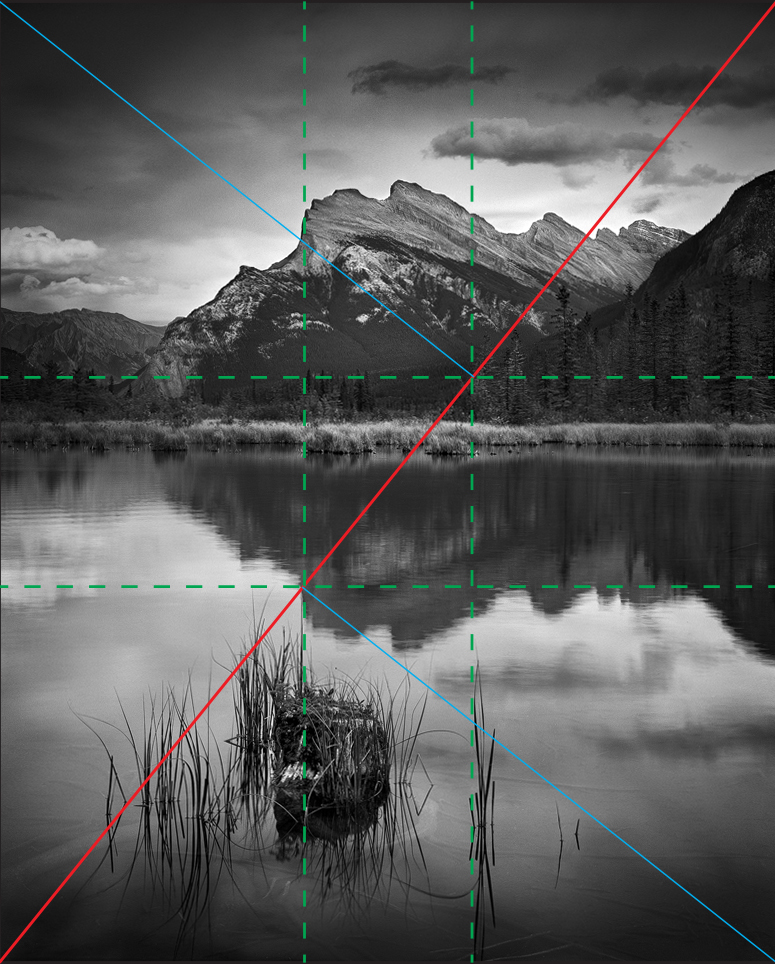 By doing so I can also trace secondary vertical and horizontal lines out of the tension points of these two lines (in green).
That allowed me to do three things. It allowed me to frame the top of Rundle in between the two verticals, it allowed me to check placement of the tops of the trees (I was fortunate the composition did that for me) and I placed the stump on the left vertical. Also note how the triangle on the bottom frames the grasses around the stump. Again, yes that was intentional.

I could have obviously used the other diagonal and placed the stump on the right. Although the composition would have then been very right heavy because of the overly dark tones on the right hand side. But I can use the sinister diagonal (top left to bottom right) to further refine my composition. I did so and lowered the same reciprocals. Overlay all of this and now I can add tertiary verticals and horizontals and even go beyond that with quaternary lines. The design of this photo should now be very clear to you. 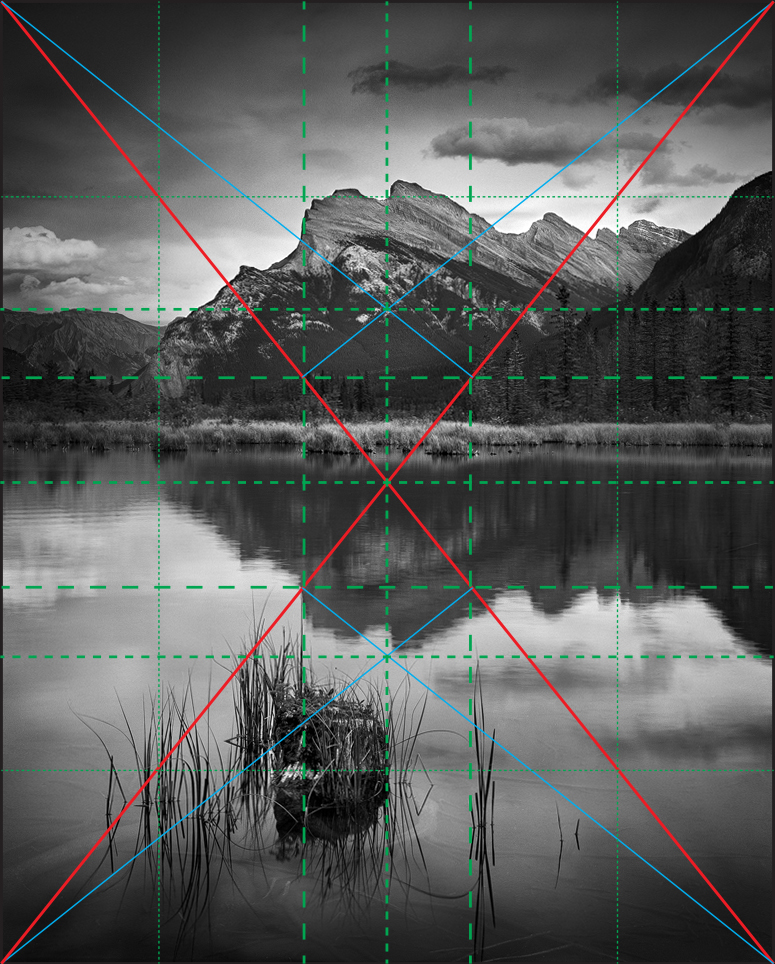 Another technique I love to use is designing with root rectangles to place elements as previously touched on.

Let's take the top section for example. If I draw a square now at the top of this photo and do the diagonal and circle 'trick', you can see that the reflection is now purposely placed as well. See how the circle 'cups' the reflection? The top of the reflected trees fall on the √2 rectangle. If I now draw another diagonal starting from the same point I previously started from to that √2 rectangle, I can now find the √3 rectangle. And so on and so forth. 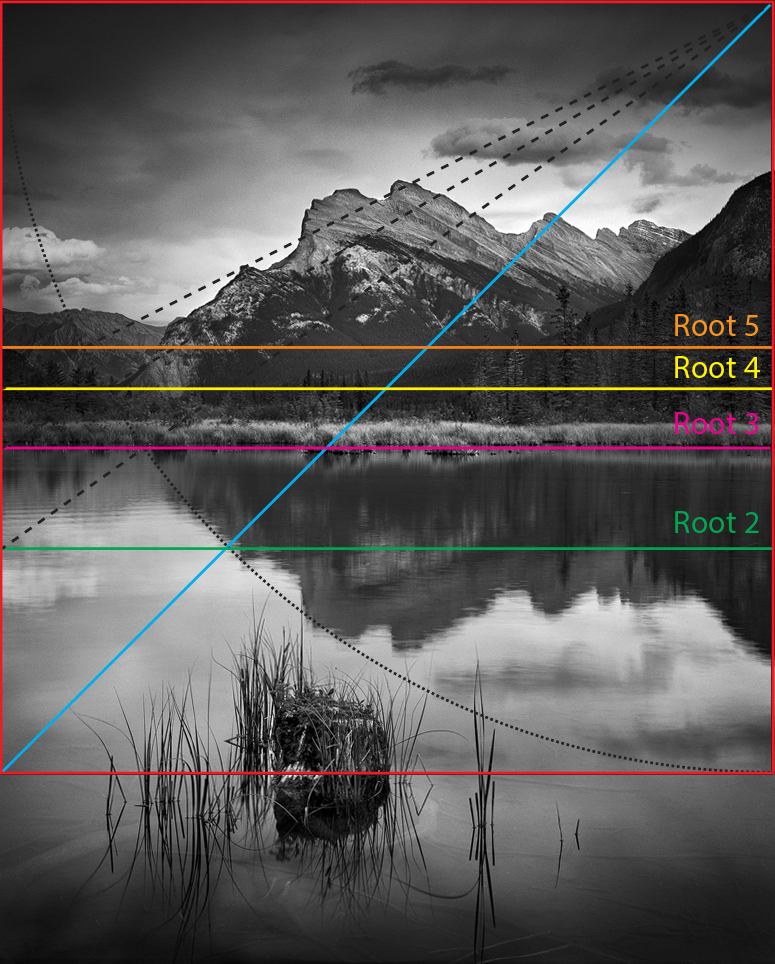 Of course you can use the other diagonal too and start drawing a circle from another corner and do this all again. Kind of to 'double check' your composition. 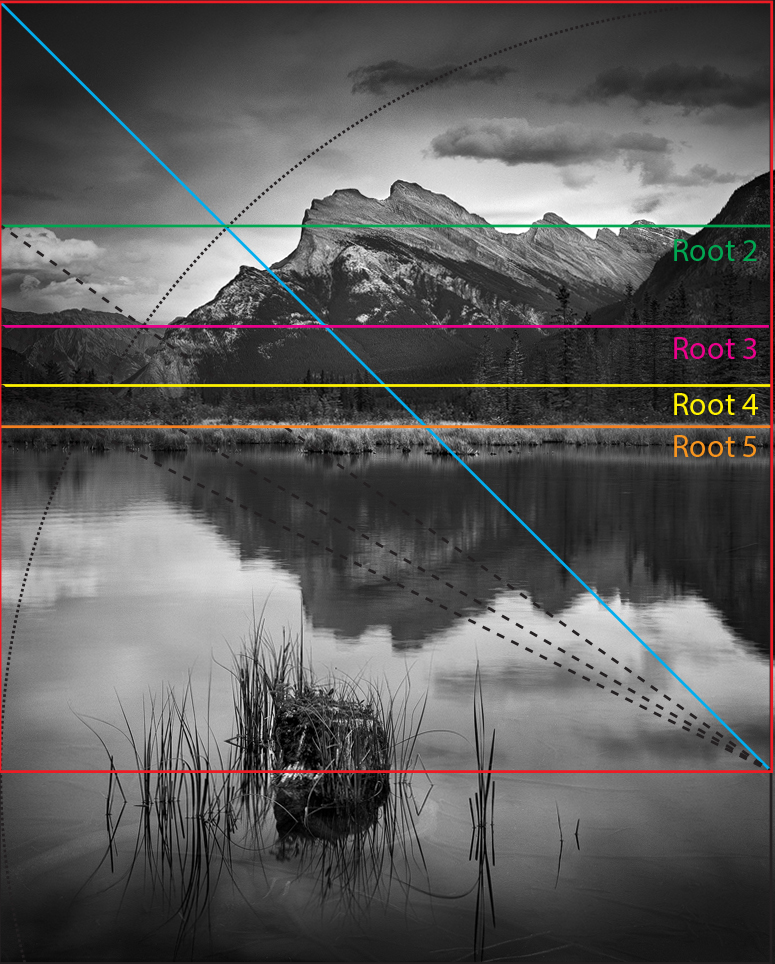 Anyway. That's just some of the stuff I think about when composing photographs. It looks all very technical but these techniques can easily be integrated in your workflow. If you use live view to compose your work for example, you already do this to some extent
Using a large format camera gives me the advantage I can stand back a little farther and study a photograph on the ground glass (that things does have a lot of lines on it) in all peace and quiet under the dark cloth. Plus it is upside down and reversed, which means my brain is not recognising what I'm looking at and therefor I can think about this in a more abstract way.
Solid composition is the coat hanger of any piece of art. Sculpture, architecture, painting, poetry, and yes photography as well. Back in the day, painters would go to great lengths to design their paintings. So why wouldn't we try to do the same?
I think it's pretty unfortunate that so many beginning photographers place more importance on technique than solid composition.

Training can make your eyes and mind pick up on these things. I am lucky I have a background in graphic design. But studying the old photographic masters, studying paintings and architecture and thinking about these things while visiting musea will make you a better artist in the end.