Last night all my data suggested that the auroras could have been out. Everything went crazy (for no apparent reason). Around 10pm, I got a yellow alert from the aurora watch website in Edmonton. About an hour later that changed to a red alert which means 'If you go out now, you'll see them'.
So I grabbed my gear and headed out.

Summertime is an awesome time to be out and enjoy the heavens above. I like shooting startrails and other weather/space phenomenons. The people that know me will testify I am a science geek in disguise.

Anyhow, so last night I was out in anticipation of some aurora's. Long story short. The darkness falls way after 12am here now which is not really helping when you have to get up the next day to go to work. *yawn*

Although I did not see any auroras, I was rewarded with a nice display of NLC's on the northern horizon. NLC's, Noctilucent clouds or Night Shining Clouds are the highest clouds in our atmosphere. You can read all about it here. Scientists think they are a sign of changing conditions in the atmosphere. All the shots where taken between 12am and 12.15am. 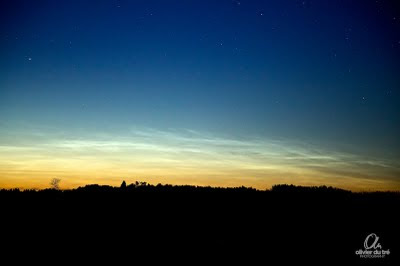 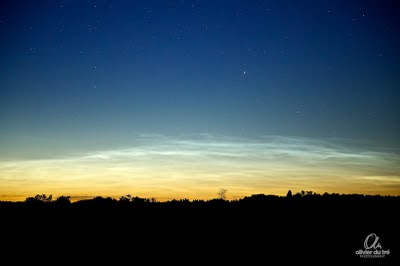