Solar Eclipse How To 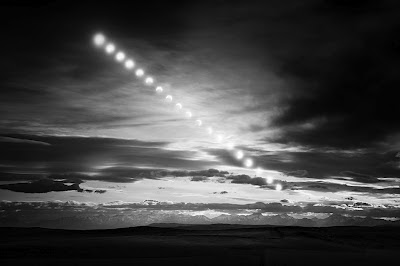 This was my view on the partial solar eclipse that happened on Sunday. It was a beauty that I almost missed photographing.
My parents are in town and they wanted me to take them out to Drumheller. I clearly said in advance that I did not wanted to miss the solar eclipse and so I told them we were going to be on a tight schedule once on the road.
Drumheller was great by the way. For the first time in a long time I came back with quite a few photographs I liked. And of course I will be sharing these in the next few weeks.

Anyway. Lets go back to Saturday first. On Saturday I did a photography talk for The Camera Store. I did a presentation on why I like photographing in bad weather. About 25 people came out and in between  the break I started chatting with two people. We chatted about weather forecasts and the coming solar eclipse. They both wanted to know what I was going to do... How I was going to photograph it. I said 'you'll see on Monday what I did with it'. But truth was, I had no idea yet. I just knew I wanted mountains on the bottom and that I was going to do a composite.

Back to Sunday. Coming back from Drumheller, the closer we got to Calgary, the more clouds we were seeing. And in Cochrane I made the call NOT to go out. Seconds later the sun popped into a clear section and it was a mad dash to get to the spot I planned for this opportunity in time.
My dad went with me and we had a great time photographing this event together.

This was how I created the photograph.


That is how a photograph like this is done. Pretty simple idea. Semi-complex Photoshop file. All in all I called it a succes.
O and the same technique can be applied for a lunar eclipse for instance (just be sure to leave out the ND filter).
Posted by Olivier at 4:47 PM