'Super' moon, not so super?

This weekend, there was – what news websites called – a 'SUPER' Moon. The Moon was going to be huge according to main stream media.


Where you out, hoping to see an 'end of the world and we are all going to die' sized Moon and where you disappointed when you saw that the Moon was actually not all that big?

As an astro-geek, I've seen my fair share of 'Perigee' and 'Apogee' full Moons and realistically (unless you have a telescope) the human eye does NOT see a lot of difference between the two. Sure if you do a side by side analyses of the two you would see a difference. But noticing it with the naked eye is something impossible to do (since there are no tape measures flying around in the sky).

It just shows you how much hype, the media can stir up. I for a fact, wasn't too excited about it. Cause 2 seconds worth of thinking and calculating meant this. The Moon's general apparent size in the sky is 0.5°. They were saying this 'Super' moon was going to be 14% larger than normal. Which meant, 0.5° + 14% = 0.57°. You see where I mean?

What I am excited about (and what the media hasn't picked up on yet) is the partial solar eclipse, North America will witness on May 20 at sunset. Here are 2 screen caps on what the sky should look like around Cochrane, Alberta (or any part of North America) around 7pm MST. About 60% of the sun is going to be eclipsed. So start making plans on how you can photograph this. 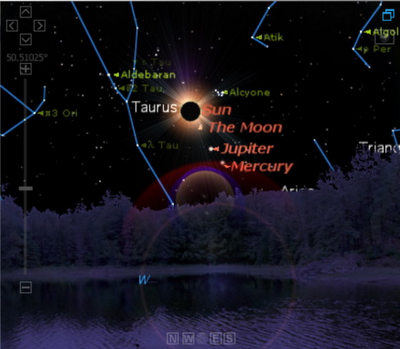 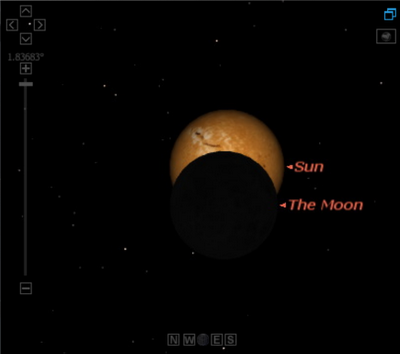