When I was living in Belgium I did everything BUT photographing landscapes. Most of the time I was into flash photography, doing studio portraits, a little bit of fashion, and I did work for some local rock and punk rock bands.

I've always enjoyed doing flash photography. Instead of waiting for the light or conditions to be right for a landscape shot, you just make the light work your way instead. It truly gives you a far better understanding of the differences light can make on a subject once you start playing around with it.

Quite some time ago, my friend and ex-colleague Tim Morrison, singer of Canadian Rock band Age of Days talked me into doing a band shoot for them. I knew Tim loved my work and after a little creative meeting, we came up with this epic idea of doing a black and white shoot in Drumheller.

A few weeks later, I took him out on a scouting trip and showed him some of my favourite places around Drumheller. Showing him, the classics locations everyone visits and some back country stuff too while bouncing some more ideas of each other. Man we had an awesome time. Talk about being on the same page with somebody. At one point we scouted out a beautiful pasture with some gorgeous views on the valley below (more on that later). We knew this had to be one of our main locations we could work with.

A few weeks later, I've met the complete band. Age of Days was on a little Canadian tour and were enjoying a day off (on Canada Day) in Airdrie. We went for breakfast in a local establishment and went on our way to Drumheller (a 90 minute drive). After some van troubles (a sticky automatic transmission) we finally arrived at our destination.

A week prior to the shoot, I was looking at the weather forecasts. They were predicting some epic weather for us to photograph in. The predictions stayed constant during the week. And I knew, we would get lucky with some crazy skies later in the day. July around here is pretty much the beginning of peak storm season. So I was happy. No dull blue skies for my shoots.

The shoot started out with harsh light and blue skies. I knew we had to look for a nice shadow spot. When we were scouting some weeks before, Tim and I found some abandoned rusty grain silos. I knew we had to go there to start off the day.
Here are some of my favourites from that portion of the shoot. 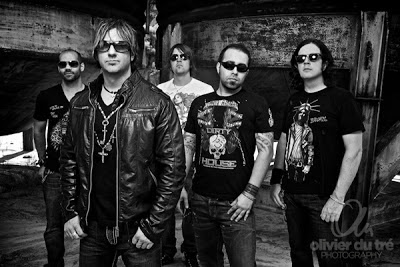 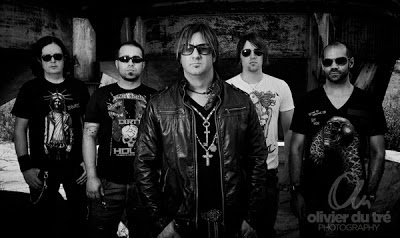 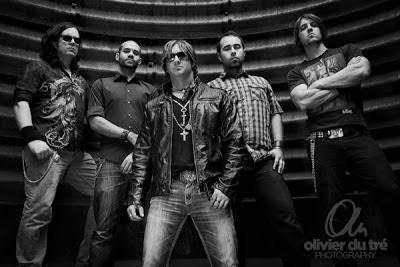 After about 2 hours of shooting (including setting up the lights, styling, etc) we called lunchtime. Afterwards we went straight to our lovely pasture I talked about earlier. Clouds were starting to form and the sky and light were slowly becoming more favourable to what both Tim and I had in mind for the next scene.

What we did not foresee was the fact that this pasture near Dorothy, in those two or three weeks after we had scouted it, had transformed itself into 'mosquito heaven'. Thousand of mosquitos were swarming around us. It was insanity. Photographing in conditions like these were ... euh ... tough, to say the least. The guys pushed through it like real rock stars (pun intended). But in between shots, everybody was slaying mosquitos by the hundreds. I kid you not! After my first 20 bites, I gave up. I just let them eat me. There was absolutely no point in using mosquito repellant, or killing them in any other way. They were just too many. Just to give you an idea, I had 125 bites on both arms and upper body. IN-SANE. The guys had a show the next day. I bet it was an itchy stage performance. :D

Anyway. This is the photograph we ended up with. Absolutely one of my favourites of the day. It is a 4 frame stitch to get the panoramic shot I've envisioned.

And here's one from Tim. I like this portrait a lot. I has some sort of fashion allure to it. It reminds me of a Chanel ad I've once saw. Anyway, he'll kill me for posting this. ;) Tough luck buddy, this is my blog. 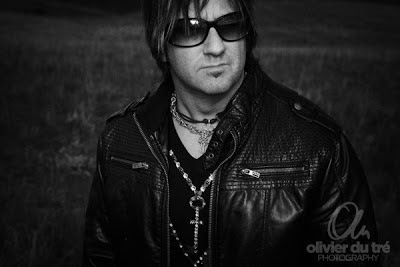 As the afternoon progressed I had 2 more compositions I wanted to try out. Real thunder clouds were starting to form now. Just as I expected the light that was coming with it, was EPIC. We drove back from Dorothy past these beautiful coulee hills. I had to stop and try something with the guys. I wanted to show the grandeur of the landscape. I promised them, there were no mosquitos this time. 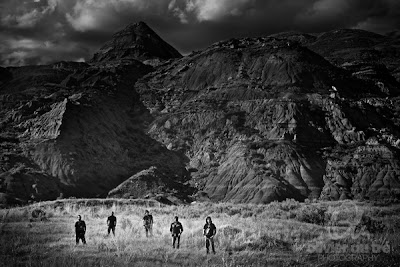 For the final composition, we scouted out a nice little, more intimate, coulee. Storm clouds were ABSOLUTELY EPIC now. We didn't stay too long because at one point, we were right underneath a rotating vortex. As a storm chaser, I pulled the plug right there. We were in a spot that was a little too dangerous for us to be in. The picture though is one that we will ALL remember. 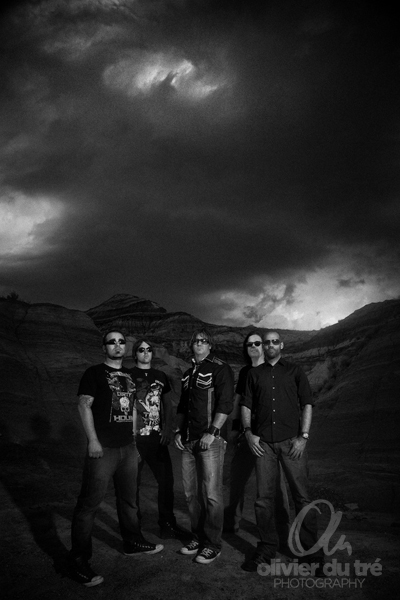 As you can imagine. The day was a long one and we were all very VERY tired. But I knew I had some really good footage.

I like photographing something different once in a while. And photographing Age of Days was definitely something I've enjoyed. Something I would love to do more of in the future. These guys are passionate about what they do. And they were a pleasure to work with. Their first single 'Bombs Away' has just broke into the top 30 on the Active Rock charts in Canada. It's such a great little tune.